Dock Spiders Use Hit-By-Pitch in 10th to Walk-Off Chinooks, 7-6

Dock Spiders Use Hit-By-Pitch in 10th to Walk-Off Chinooks, 7-6

Tyeler Hawkins (Louisville) was hit by a pitch in the 10th inning to bring home Parker Noland (Vanderbilt), and give the Fond du Lac Dock Spiders a 7-6 win over the Lakeshore Chinooks to snap their four-game losing streak on Wednesday night at Herr-Baker Field.

The win, combined with a Wausau Woodchucks loss to the Green Bay Rockers, keeps the Dock Spiders elimination number at four, and they sit one game back of the Woodchucks for the final Northwoods League playoff spot with three games remaining. The Dock Spiders are now 35-33 on the year, 16-18 in the second half. The Chinooks fell to 33-35 overall, and 15-17 in the second
half.

For the fifth straight game, the Dock Spiders scored first. Kemp Alderman (Ole Miss) drove in his first of four runs on the night with a sacrifice fly in the first. Alderman would add to the lead with a two-RBI single to right-center to make it 5-1 after Brady Katterhagen (UW-Platteville) doubled down the line in right to bring home a run.

The Chinooks would then fight back with a run-scoring error in the third and a sacrifice fly in the fourth inning from Tony Livermore (Northwestern) to cut the Dock Spiders lead to 5-3. They would then take the lead in the top of the seventh after an error brought home two and a sacrifice fly from Matthias Haas (Cal Poly) made it 6-5. The Dock Spiders would then tie it at six in the bottom of
the inning after Peter Fusek (Western Illinois) led off the inning with a triple, and a pinch-hit sacrifice fly from Bennett Thompson (Oregon) brought him in.

Noah Magee (2-1, Ole Miss) got the win for the Dock Spiders after a season-high 3.2 innings in relief. He used a diving double play from Sawyer Smith (St. Cloud State) in the eighth to escape a jam and then a back-handed play at second from Parker Noland in the tenth.

The Dock Spiders used an intentional walk and a single from Smith to load the bases off reliever Luke Schafer (0-3, Ball State), who took the loss after Hawkins was hit on the arm to walk it off.

The two will meet for their final match-up of the season tomorrow at 6:35 p.m. at Herr-Baker Field. Thursday is Marty Paulsen Appreciation Night, as the Dock Spiders celebrate the 50-plus year career of the former Fond du Lac High School baseball coach, who retired this past spring. The first 250 fans will also receive an Arañas de Muelle drawstring bag courtesy of Moraine Park
Technical College. 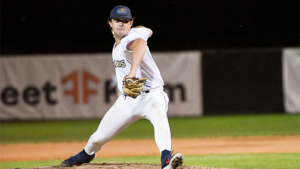